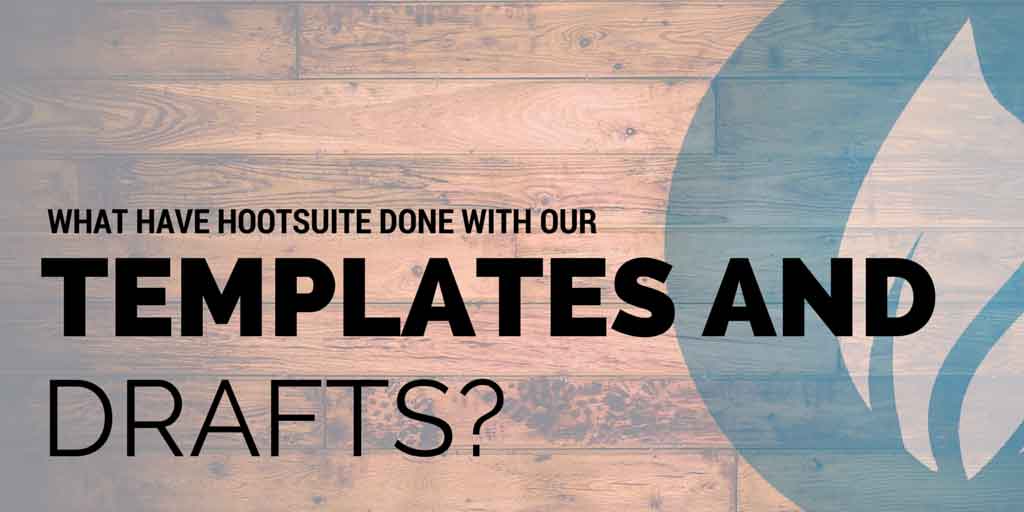 On the 15th April 2015, Hootsuite rolled out an update to their platform that caused users around the world to tear their hair out in despair.

Users logging in to the updated Hootsuite service found that all their stored Templates and Drafts had disappeared, together with Hootsuite’s popular Template feature itself.

While it appears that the loss of users’ content (in the form of both Templates and Drafts) was unintentional, the decision to remove the Template feature was a deliberate decision – and doesn’t look likely to return any time soon. This will make life harder for Social Media Managers, and in our opinion, seriously reduces the benefits of using Hootsuite as a management platform.

Content? Features? What do you mean? What has been lost?

Now, Hootsuite appear to be working hard to restore the content to users, but not the Template function.

Even if Hootsuite are able to salvage this data, and return it to users, the templates cannot be used in the same way as before.

What’s the difference between templates and drafts?

A ‘draft’ post works on the same principle as an email draft. It is a work in progress – perhaps a half-written Tweet or Facebook post – that can be returned to, and then posted one time only. Once the draft has been posted, it disappears. To re-use this message in the future, you need to manually re-enter the post again.

A ‘template’ is different – it is stored, and can be reused (and modified) any number of times. Once you’ve sent a post based on a template, the template remains – and can be used time and time again to send the same (or similar) messages.

This latest update has removed the Template feature from Hootsuite entirely.

What does this mean in practice, though?

Put simply, it is disastrous for Social Media Managers – especially those who have relied on Hootsuite to both store their template messages and posts, and let them access them quickly and easily to repost them on an ongoing basis.

Many Hootsuite users (ourselves included) have spent years building up a collection of Templates for general marketing use. Over time, we’ve learnt what works and what doesn’t, refined our messages, and perfected our posts. These have always been stored on Hootsuite, accessible at any time, and – until this update – a brilliantly useful feature.

Unless Hootsuite have a change of heart and restore the Template function, we no longer consider it a useful platform for Social Media Management.

Why are you so worked up about it?

Firstly, the Template functionality was absolutely central to the way we (and many of our clients) used Hootsuite – organised their marketing campaigns, and split tested their messages. For just £10 a month, Hootsuite let you store and access your messages in a quick, convenient, and incredibly useful way.

It was, in no small part, what made Hootsuite so brilliant to use. It’s why we used it, and recommended it to our clients. It was part of the reason why Hootsuite became a clear market leader.

And now, without warning or announcement, this function has been removed – from paying customers – and has rendered the system much, much less useful.

Secondly, and perhaps more frustratingly, is the way Hootsuite have handled this issue on Twitter – and if you ever want an example of how NOT to communicate with your customers, take a look.

In the same way as any large organisation, Hootsuite handle complaints and queries using a ticket system – which means complaints can be tracked through to resolution.

However, this is being used as the stock response to users expressing dismay at the update.

Your templates have gone? “We’ll raise a ticket for you.”

Want to know if template function is returning? “We’ll raise a ticket for you.”

Can we reuse drafts, or are they single use? “We’ll raise a ticket for you.”

Even worse, when Hootsuite do respond to direct questions, they are simply saying that their “developers are working hard to resolve the issue” or that it is “being investigated with high priority” – even when this is simply not the case.

To be clear – I’m absolutely sure they’re working hard to recover the content that has been lost.

But from present appearances, they are not working hard to resolve the fact that Template functionality is not returning:

@ImpactGroupDT No, the templates feature will not be returning. Apologies for the inconvenience at this time ^SL

doesn’t really match up with this implied promise:

@MisterELiquid Apologies.Our team is currently investigating this issue with high priority. Please DM us your email to receive updates^EO

Or even this bizarre claim that ‘templates’ and ‘drafts’ are the same thing:

@fwemedia Yes, I was referring to drafts and templates 🙂 You'll receive an email update as soon as it's available ^SW

In short – they are not being entirely clear with their users – who are, quite understandably, panicking.

What should have Hootsuite done instead?

Hootsuite have failed to ‘grasp the nettle’ and announce to their users the true issues surrounding the update.

A clear message explaining the situation would have gone a long way towards alleviating users’ panic, and managing their expectations for what a ‘resolved’ situation would look like.

Instead, they have – perhaps unintentionally – failed to give users full information about the update. Many users are still under the impression that their template content (and the ability to use the template feature) will return once things are ‘fixed’. At present, this is not the case – and unless Hootsuite have a change of heart, many users – including ourselves and our clients – will be moving our work (and payments!) elsewhere.

Have you lost data because of the update? Are you thinking of moving elsewhere? Let us know below!

David has worked with countless UK charities, businesses, and schools - with a brilliant track record of helping them with their biggest challenges. David is the founder of the Impact group - including Impact Charity Advisors, Impact Business Advisors, and Impact Education Support.

Get the Latest Impact News: